Suite of premium reports to help you handicap!

With a DRF+ Pro subscription, you'll have access to everything below. Click each item to learn more.

Don't hesitate to ask us anything about DRF+ Pro!
Email us at cservice2@drf.com 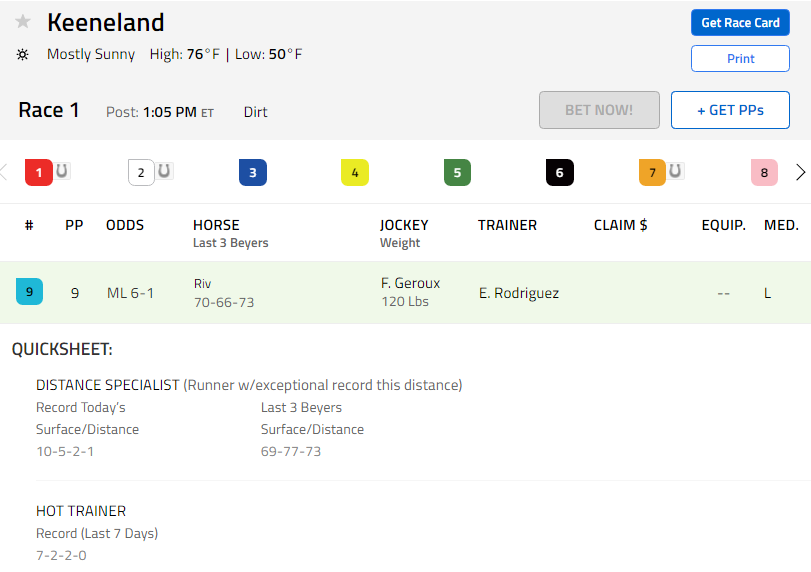 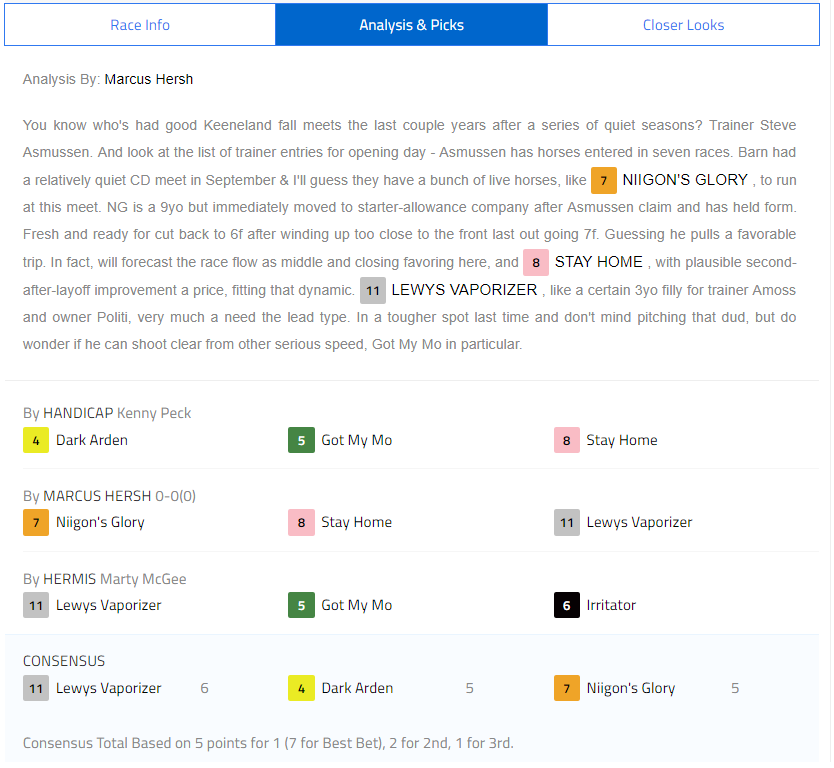 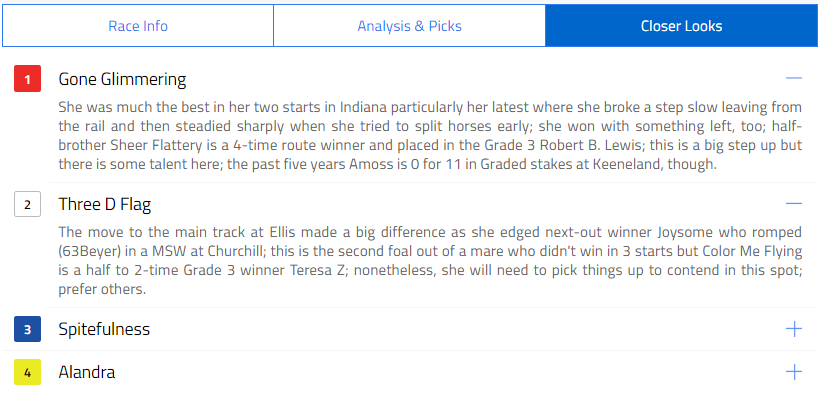 Exclusive pre-race analysis that highlights horses and angles to help you pick winners. 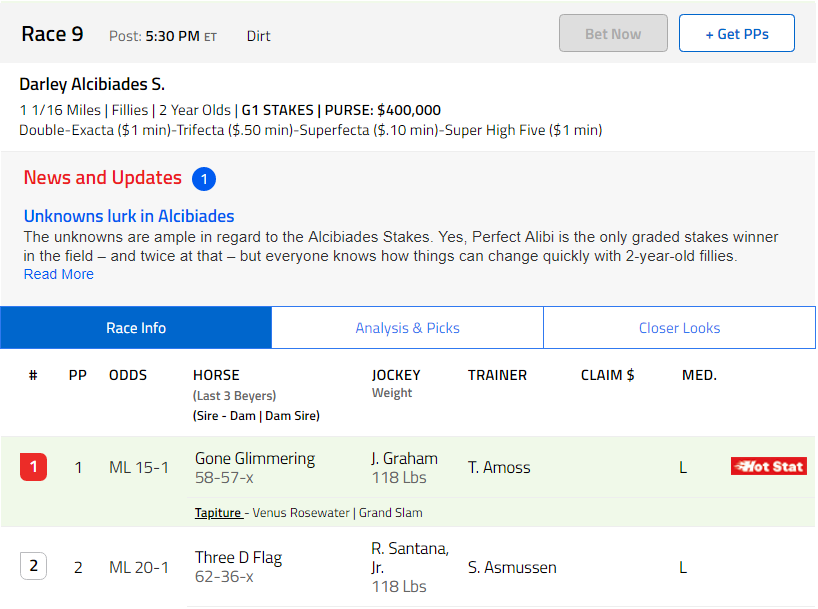 Beyer Speed Figures express the most important factor in handicapping: how fast a horse has run in each of his starts.

The winning figure for a race is based on three factors: the final time, the distance, and the inherent speed of the track (a calculation known as the track variant.) For losing horses, points are deducted according the lengths behind the winner and the distance of the race.

Beyer Speed Figures are interchangeable from track to track. A 90 at Saratoga is the same quality of performance as a 90 at the Ferndale Fair.

Moreover, a figure of 90 in a six-furlong race is the same quality of performance as a 90 at 1 ¼ miles. (Of course, all horses have distances they prefer, and a sprinter who earns a big figure at six furlongs is unlikely to duplicate it in the Kentucky Derby.)

The system behind the figures was explained in detail and popularized by Andrew Beyer’s book, Picking Winners, published in 1975. Beyer Figures became part of Daily Racing Form past performances in 1992. The methodology has stood the test of time, though the availability of computer-generated data has enabled some refinements over the years.

The calculation of figures is not a mechanical process. It is done, and has always been done, by human beings—Beyer and Mark Hopkins, and their six associates. They employ their judgment in analyzing any racing card and determining the track variant. If their calculations would produce a figure that defies logic (due to a timing error, or a sudden change in the condition of the track, for example) they will assign the race a figure that reflects the true ability of horses in the field. Such situations can often arise in turf races when an extremely slow pace prevents horses from running a final time of which they would normally be capable.

In cases where figures are questionable, races are reviewed after horses in the field run again. Beyer Speed Figures will sometimes be revised after they are originally published. The ultimate objective is to have every number express the quality of a horse’s performance.

Beyer Speed Figures of the Week 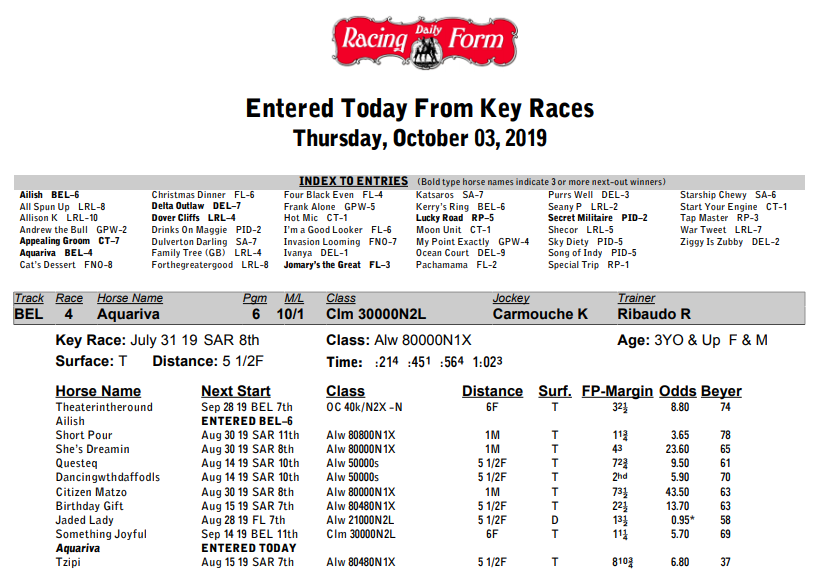 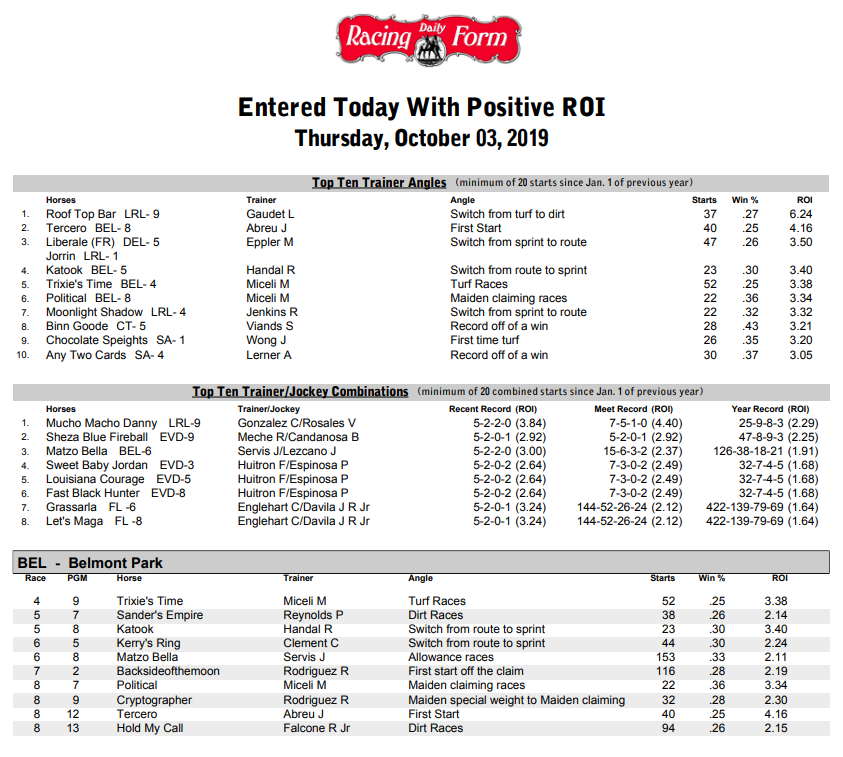 Available for every track in the U.S. and Canada on one daily report, the DRF Positive ROI Report highlights every winning trainer angle and winning trainer/jockey combo associated with all horses running on a given day.

These winning angles are defined by their return on investment (ROI), if the horseplayer were to invest in these angles with win bets every time a trainer angle is in play, dating back to January of the previous calendar year.

If the ROI exceeds $2 for every $2 bet, it is a winning angle, and it is featured in the report.

The Positive R.O.I. Report is available for download at 3:30 p.m. Eastern one day prior to race day and is reprocessed two additional times in order to include the prior day's races for statistical referencing. 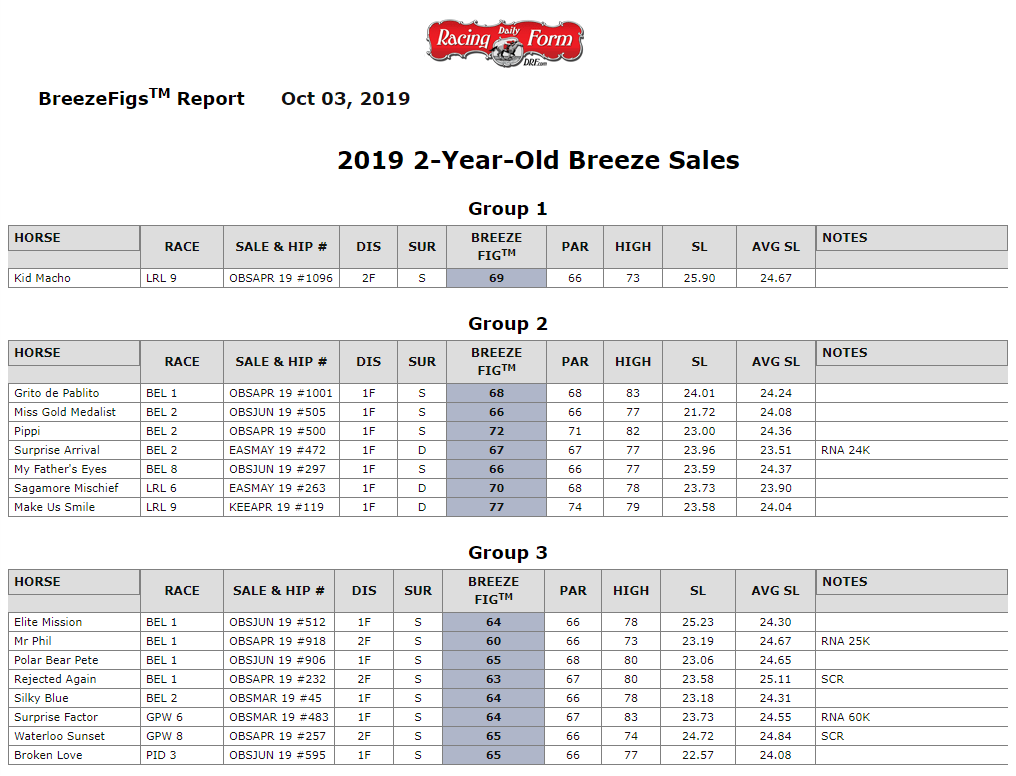 A BreezeFig™ is a simple number that combines time, stride length, miles per hour and a unique set of power factors for every horse which breezes at least once at a 2-year-old in training sale.

Available for every track in the U.S. on one daily report, a BreezeFig™ report gives you an edge when playing maiden races.

The report rates the workouts by all horses at 2-year-old-in training sales who are subsequently running at tracks across the country every day.

Without BreezeFigs™, a handicapper can only see official breezes posted at racetracks in the past performances. By using BreezeFigs™, the handicapper now has the added advantage of knowing how long the horse has really been in training. 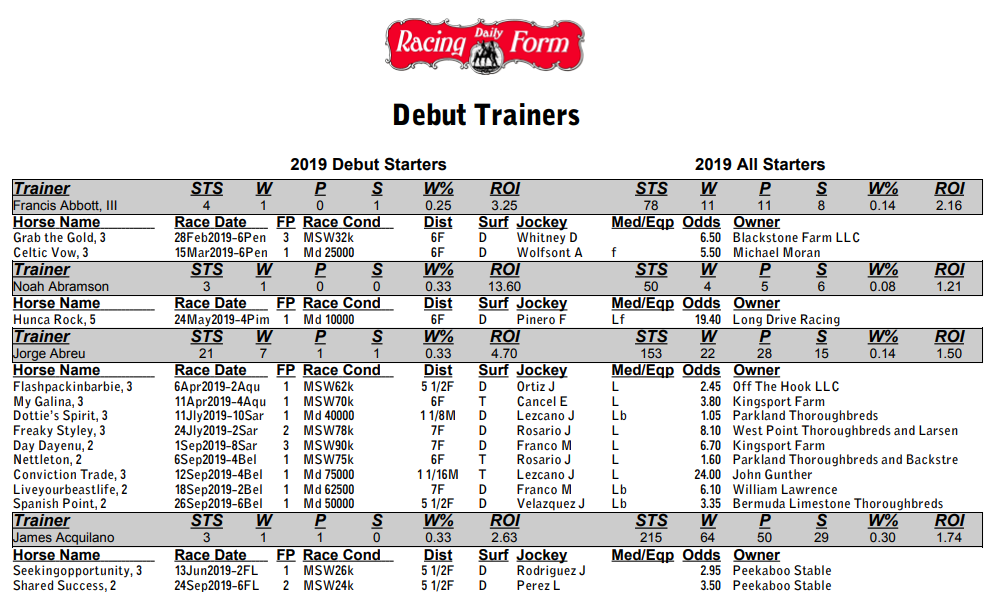 In this age of speed figures, pace figures, and trip handicapping, it seems that trainer analysts and pedigree gurus are oddballs and outcasts. What happens, however, when you can't assign a number on a horse? In maiden races, we often see first-time starters with no past performance lines to rate. What's a handicapper to do? We see a trainer's first-out percentage over the last 18 months in the Daily Racing Form, and often the sire's prowess with debut runners is mentioned in "A Closer Look."

With these reports from DRF.com, we can break down the numbers even further. Every debut winner is ranked by sire, broodmare sire, and trainer. In addition, first-time starters that placed second or third are also listed. Want to know if Bob Baffert uses blinkers on his successful debut runners? Does Tale of the Cat have any early winners on synthetic surfaces? Carson City is a great debut sire. Are mares by Carson City throwing early winners as well? Can we find a sire-broodmare sire 'nick' that leads to debut success?

All the information is here, and information is power. Handicappers will get the cold hard facts with these regularly updated reports, and will be able to draw their own conclusions. Want to make your own trainer and sire ratings? This will help you take the first step in handicapping those tricky first-time starters. Hopefully, you'll have some fun as well. - Dan Illman 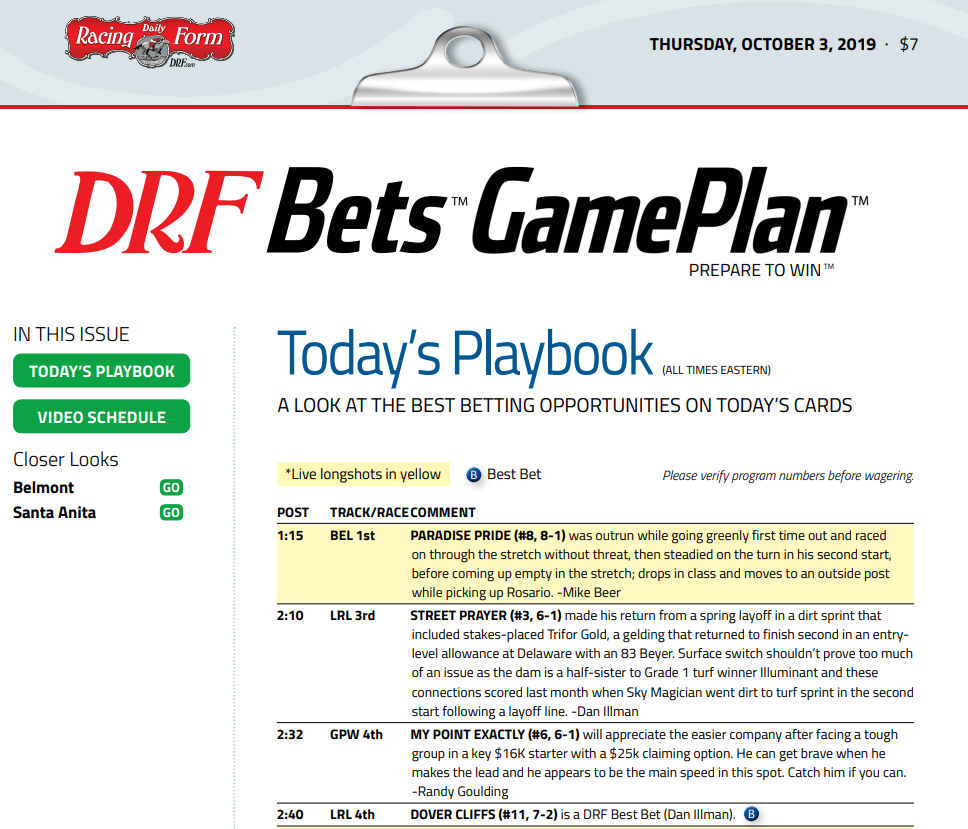 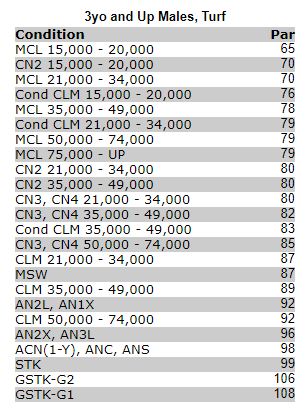 Pars for Beyer Speed Figures represent the approximate average winning figure for a given class at a given track.

These numbers reflect the relative strength of different racing circuits. At Belmont Park, maiden special weight races for older horses have a par of 87. The par for the same class at Thistledown is 59. 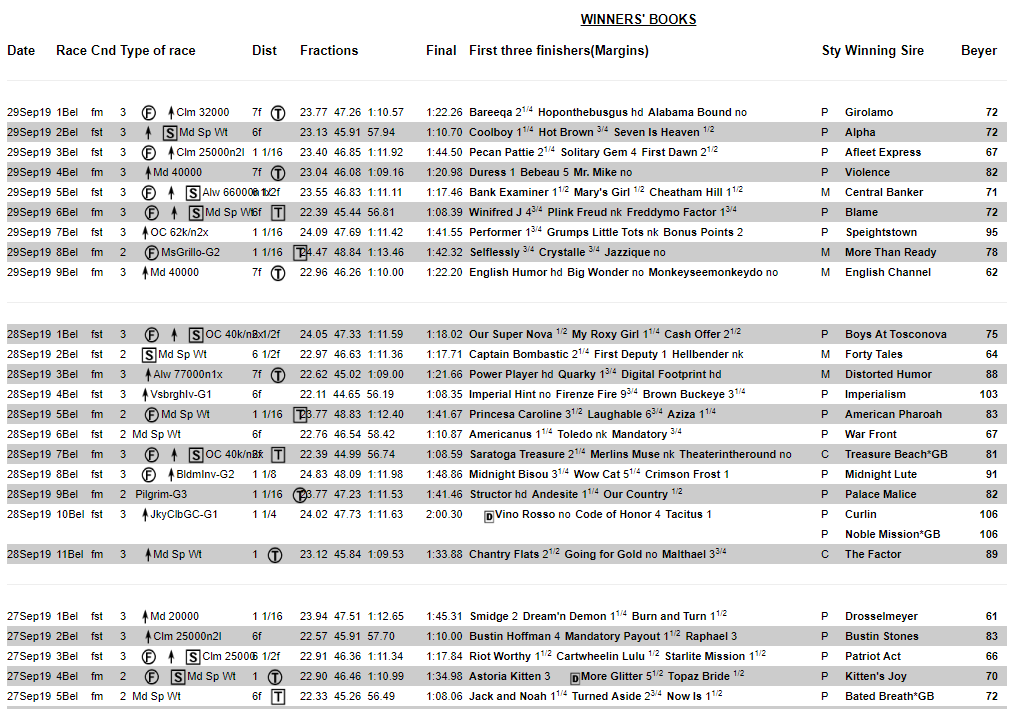 Get a listing of the top three finishers from every track with vital information, including the winner’s Beyer Speed Figure, race fractions, and the running style of the winning horse. 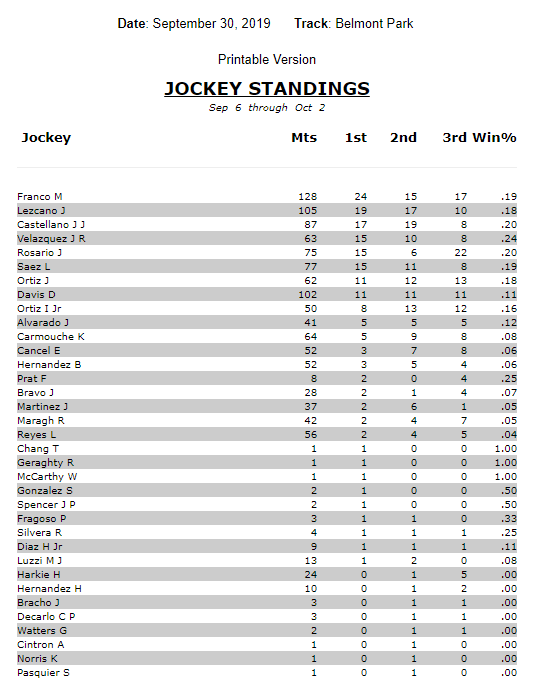 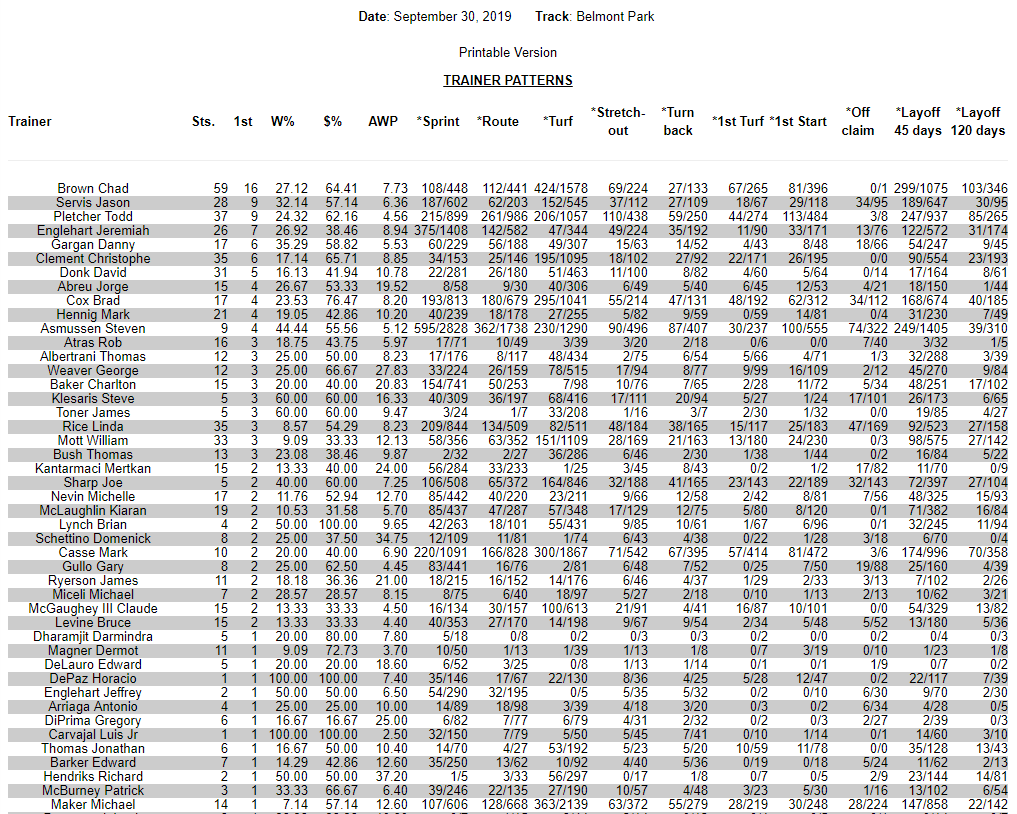 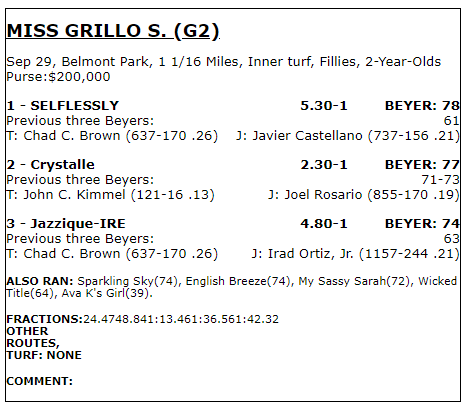 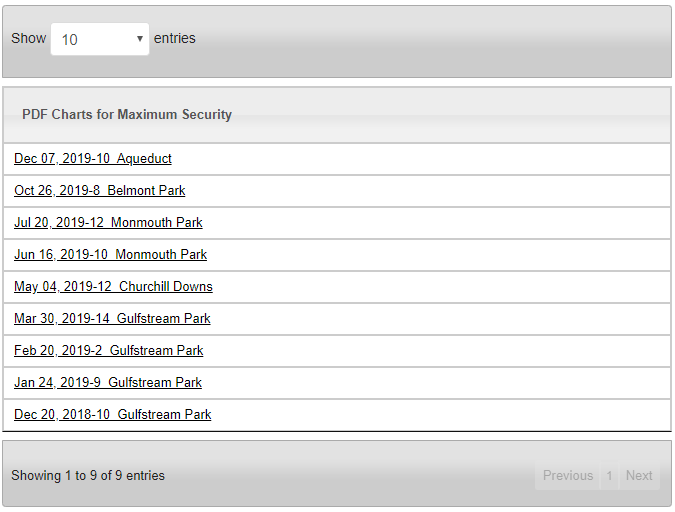 About
Back to DRF